If you have been diagnosed with endometriosis, you may be aware that this disease has four stages and not all endometriosis symptoms are present at every stage. You may also know that endometriosis can be difficult to treat at a higher stage of the disease, where the symptoms can lead to infertility and a high likelihood of developing reproductive cancer in the future. 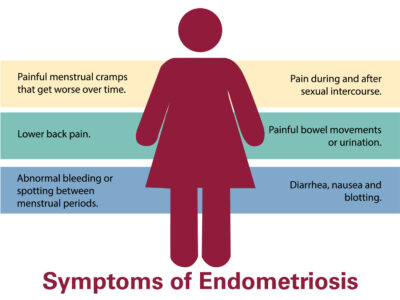 Menstrual blood that is excreted from a woman's body every month actually consists of muscle tissue and comes from the lining of the uterus. This inner lining, called the endometrium, thickens at the same time each month and is believed to be the future placenta, the mother-to-child nutrition medium.

In some rare cases, menstrual blood is not drained from the body properly. Instead, it finds its way out of the uterus and attacks nearby bones, tissues, and organs. Once the pockets of endometrial tissue leave the uterus but not the body, some women can have problems.

Normally the immune system will handle this dangerous tissue, but in some women the lining of the uterus may attach to certain bones and tissues and then separate and bleed each month according to the menstrual cycle causing endometriosis.

As a result, women suffering from endometriosis feel "heavy" in the pelvic area. In the most extreme cases, endometriosis can cause severe and progressive pain that reaches the lower back.